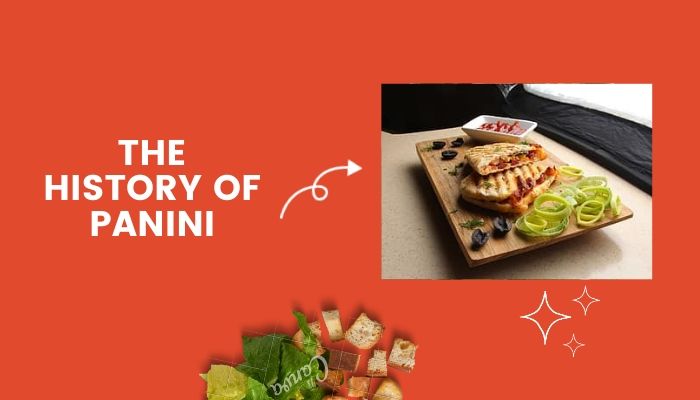 A sandwich is a very ordinary food for a food lover. But when this simple sandwich is modified with loads and loads of filling inside with two small crunchy pieces of bread on the outside, it becomes more than a sandwich. It becomes Panini. To get that delicious crunch on your Panini, you need to know about the history of Panini.

Bookish knowledge says a Panini is a small sandwich from Italy. People also pronounce it Panino to get the authentic Italian vibe. It is made with Italian bread such as ciabatta or michetta. Grilling or toasting makes the sandwich warm, and here kicks in the Panini Press.

Panini: THEN and NOW

It is impossible to accurately say who first thought about putting various sorts of filling inside two pieces of bread to get a full meal. The answer can lie back to thousands of years to Persian, Mongol, Roman, or British Empires. Not to mention undocumented America.

If not the origin, we can know who popularized this fantastic food. A precursor appeared in the 16th-century Italian cookbook with the conception of Panini. Then there came the amazing inventors of the machines that meet our Panini Craving.

Historically, John Montagu, a British Statesman, traveled worldwide and introduced meat inside the sliced bread. Here we started the sandwiches of meat lovers.

Not long after this meat conception was introduced to Britain’s high society, Charlotte Mason wrote a cookbook named Being a Complete System of Cookery. This book contained the word “sandwich” for the first time in history.

The Panini as a true form got popularity among the Italians in the early 1960s. The crunchy bread though grilling made it different from a sandwich. Consumers of America got attracted by Panini in the mid-1970s. From there, it exploded, and people all over the world became a fan of the food.

The word Panini has an Italian origin. The Italian word for a single sandwich is panino, and ‘panini’ represents the plural form of panino.

Panino is one of the simplest foods in Italy. “Panini” is commonly used in America to describe a single-pressed sandwich. The Italian panino is two pieces of bread with something savory between them.

In Italy, a panino can be anything from a bread roll topped with cheese spread to a Ciabatta roll filled with cold cuts, lettuce, and cheese. A panino is usually prepared either hot or cold; you can customize it however you’d like.

Originally from Italy, it has migrated to other countries and has changed.

Machine for the best Panini

Whatever is your choice of bread and filling, your small sandwich can be a full-formed Panini only when it gets the proper grill. And Panini Press is the most accurate solution to it. It is an impressive and very versatile cooking appliance. A Panini Press is a two-sided sandwich grill. You put your sandwich in the middle, and the tool gets it heated on both sides simultaneously and leaves the mouthwatering straight burn marks. Unlike any ordinary sandwich maker, this tool can hold inside the overfilling you put in the bread. How you want to use it depends on your creativity. Now that your curious mind wants to know who came up with the idea of this masterpiece, there is confusion about the originator. Before the invention of any device assigned to this work, people used an electric toaster or griddle to toast each slice of bread.

Thomas Edison: It was after the time when people used the sandwich grill to make their favorite Panini. Thomas Edison made something that did the same work as a Panini Press. This American did a lot more than inventing just the light bulb that we know of. Features: Thomas Edison did not name it Panini Press. But the functions are the same. His machine made it possible to grill both sides at the same time. It made the outer bottom crispy and the inside warm. And people got their cheese gooey but not overcooked. It was in the 1930s when Thomas Edison thought of this kitchen appliance. It was known as Panini Grill at that time. His first prototype was some sort of sandwich grill. He just hinged two metal pieces together.

Downfall: Back in that time, people needed electricity to work a Panini Grill. They would plug it in to heat it. Shut the clamp to press the sandwich together. Then it would heat them up to make Panini. In Edison’s time, Panini was not that popular in the US. They used this machine for other large sandwiches like Cubanos. Edison’s machine was not a big hit for obvious reasons. He was way too ahead of time. It was discontinued in 1932 due to its unpopularity. But his creation is still on display at Thomas Edison’s winter estate in Fort Myers, FL. Guess there are some things you can never forget.

Breville: Long after Edison’s death, in the 1960s, Panini got back its lost popularity. A chef named Milan from Italy made Panini a must-eat meal. It started in Italy, but it was not long until Panini’s fame spread worldwide. Panini Grill was a loss project for Edison. It didn’t get popularity among the house chefs. But this situation changed in the 1970s. This time Panini came in a new and greater form to the US. But this time, people did not rely on Edison’s Panini Grill.

Popularity: In 1974, Breville invented the new machine. This time it was called Panini Press. This invention of his won the game. It made Panini famous all around America. Thus, Edison’s invention was forgotten by the world, although he was the first inventor. With Panini, America got a new addition to its insane food variety. Panini was added to the list with other snacks. It became trendy in the Milanese bars with the name paninoteche, in the 1970s. Office workers needed a quick lunch, and Panini became their ultimate choice.

To conclude, there was a time when Panini was a fancy and upscale food choice. Thanks to the history of Panini, we get the popularized version of the layered fantasy. Even Australians know the food by the name Breville. And now it is the food of the mass people.